Take up the weapon of prayer and penance in the spiritual combat of our time. The indulgenced Pardon Crucifix (see more below), is a powerful sacramental for one’s own battle with the devil and sin and for interceding for the Poor Souls in Purgatory. This rosary also bears a Miraculous Medal center engraved with the 20 Mysteries of the Rosary, and an optional St. Michael/Guardian Angel medal.

Nickel and Job’s Tears, made by the Sisters with Job’s Tears grown in our monastery greenhouse. Available with or without the pewter St. Michael/Guardian Angel Medal; please select below.

Various indulgences are attached to the Pardon Crucifix, applicable also to the Poor Souls in Purgatory, including partial indulgences for carrying it on one’s person or kissing it, and a plenary indulgence at the moment of death by kissing it, asking pardon of God for one’s sins, and pardoning one’s neighbor (granted by Pope St. Pius X).

The front of the Crucifix displays prominently the Latin inscription, “Jesus Nazarenus Rex Judaeorum” (Jesus the Nazarean, King of the Jews). The reverse bears an image of the Sacred Heart of Jesus in the center, a symbol of the Blessed Virgin Mary at the foot of the Cross, and two inscriptions recalling our Savior’s merciful love: His prayer of pardon on the Cross, “Father, forgive them,” and His words to St. Margaret Mary Alacoque, “Behold this Heart which has so loved men.” 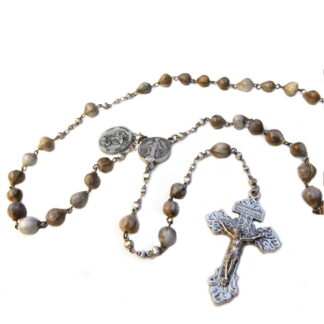