Steel gray-colored holy water bottle, commissioned by the Norbertine Canonesses and specially engraved with a design, incorporating two of the earliest Christian symbols for Christ, the Chi-Rho monogram and the Alpha Omega. Convenient keychain style makes it easy to carry this powerful sacramental with you wherever you go. Stainless steel, 1 oz.

*Please note that engraving colors may vary slightly from those in the photographs.

The Chi-Rho is one of the earliest monograms for the name of Christ, superimposing the first two Greek letters (X and P) of the word “Christos” (ΧΡΙΣΤΟΣ). It was used by the Emperor Constantine on his military standard, and is frequently found in other early Christian art and inscriptions.

The Alpha and Omega are the first and last letters of the Greek alphabet, used in by Our Lord in the Book of Revelation (21:6, 22:12) to describe Himself as the “beginning and the end,” and still inscribed by the Church today on the Paschal Candle during the Easter Vigil. 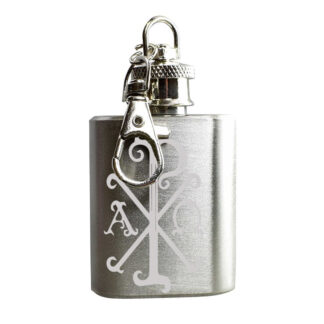