Walled About With God: The History and Spirituality of Enclosure for Cloistered Nuns

Walled About With God: The History and Spirituality of Enclosure for Cloistered Nuns is a beautiful and unique book written by cloistered nuns themselves, examining enclosure from a biblical, historical, spiritual, and theological perspective. Demonstrating that “[f]ar from being an invention of the Middle Ages which was imposed on women by a male-dominated Church and society, enclosure was in fact freely chosen by nuns themselves from the very beginning and only later became an object of canonical legislation,” the authors compellingly show how enclosure aids the prayer-life and mission of cloistered nuns. By Dom Jean Prou, OSB and the Benedictine Nuns of the Solesmes Congregation; translated and edited by Br. David Hayes, OSB. 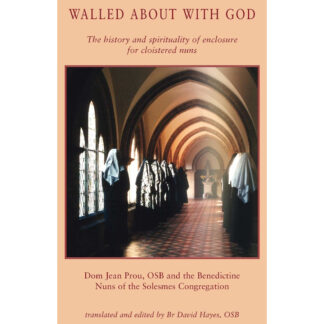 You're viewing: Walled About With God: The History and Spirituality of Enclosure for Cloistered Nuns $30.00
Add to cart